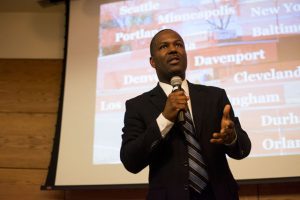 Shocked by the fiery protests in Ferguson, Missouri, Willie Barney posed one question to the audience of the MLK Week event at the University of Nebraska-Lincoln on Tuesday.

“What do we want to be known for in Lincoln, Nebraska?”

Each year, the MLK committee at UNL organizes Martin Luther King, Jr. Week to recognize progress and racial issues on the national and state level. This year’s celebration began with the Chancellor’s Program, “Beyond the Flames of Racial Discord: Working Together to Transform Communities.”

“It means something extra this year,” said Patrick Jones, a member of the MLK committee and associate professor of history and ethnic studies. “It’s an important time that we can come together and reflect as a nation on both how far we’ve come in terms of race and ethnicity and justice, and also have a conversation to think of critical ways of where we might go and where we need to go from here.”